Integration triggers allow you to define when an instance should run. There are several types of triggers, with schedule triggers and webhook triggers being the most commonly used. Many components include triggers that do things like validate webhook payloads, preprocess data, or return custom responses to the webhook caller. You can also configure a deploy trigger that runs when your integration is deployed to a customer.

If your integration has multiple flows, each flow has its own trigger (and so its own webhook URL or schedule).

You can always change which trigger your flow uses by clicking on the trigger, and clicking the CHANGE TRIGGER button in the drawer that appears. 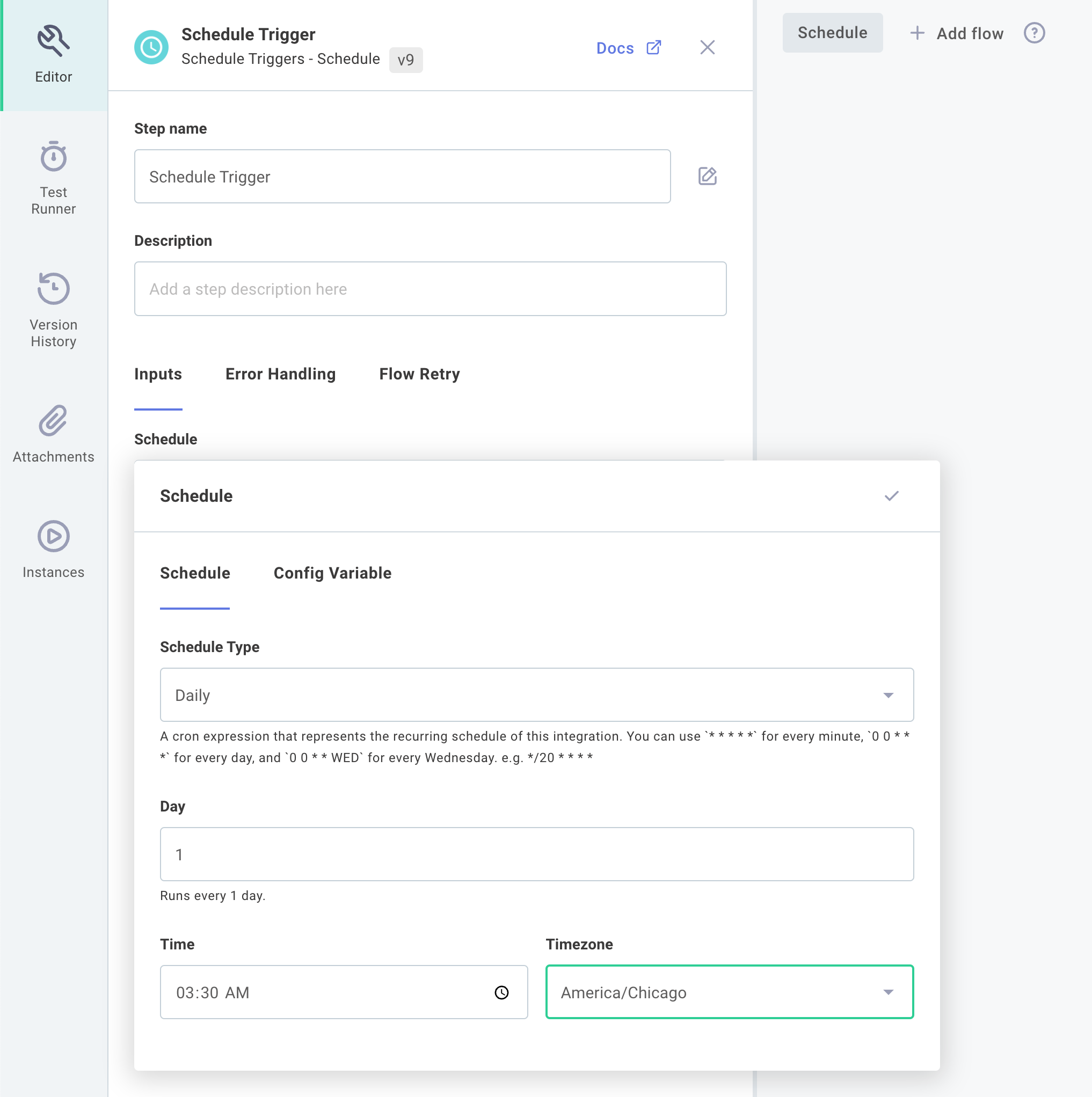 You can alternatively select Custom and provide a cron string. For example, a trigger of */5 8-16 * * 1-5 would cause your integration to run every five minutes during business hours (8:00-16:55), Monday through Friday. For help computing a cron schedule, see this Cron Calculator.

To configure schedules on a per-customer basis, first create a config variable of type Schedule by clicking the Config Variables button. You can give your config variable any name you choose: 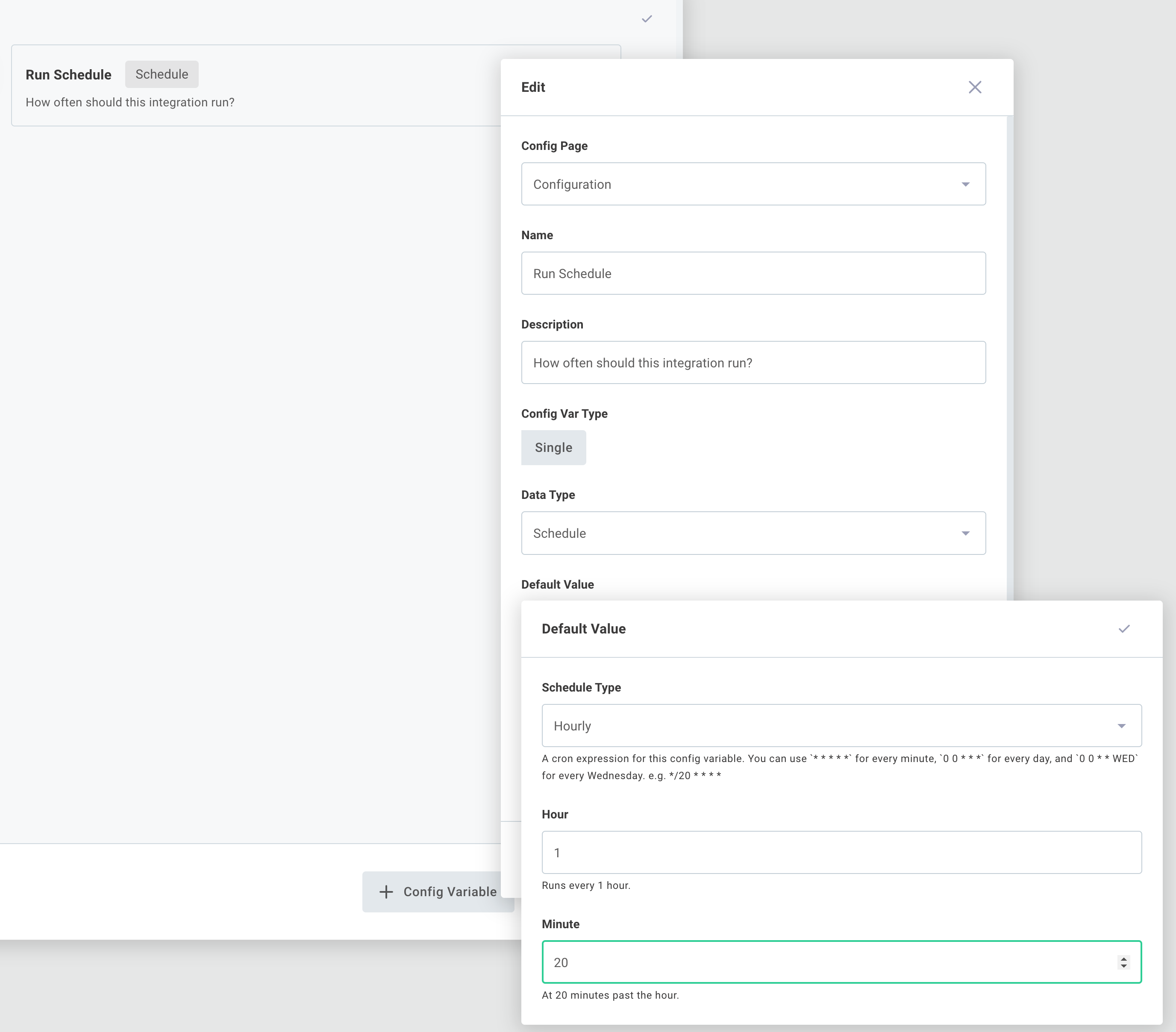 Then, click your integration trigger and reference the Config Variable you created: 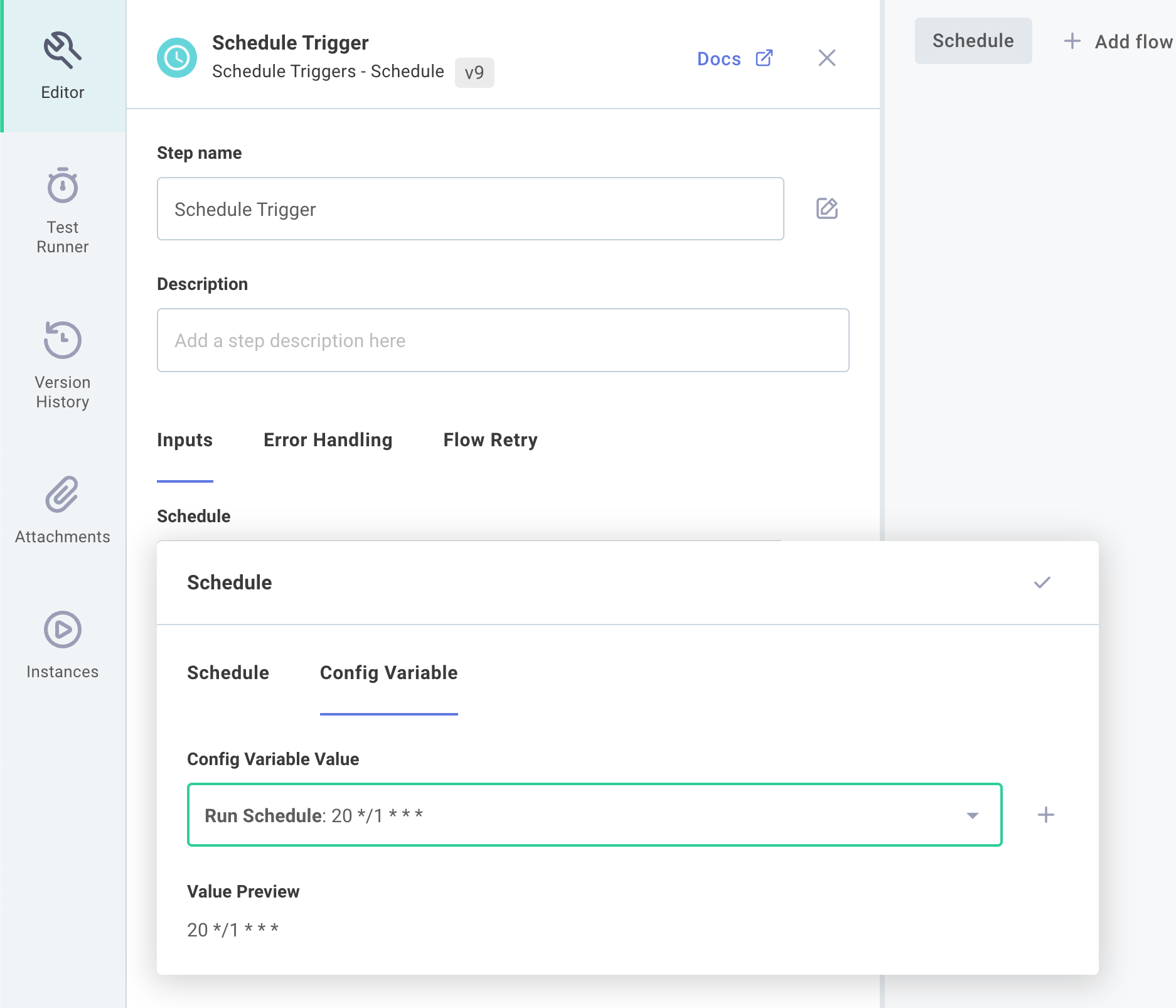 For example, third-party software could invoke an instance with a JSON payload whenever a job in the third-party application is complete, like this:

Note that the payload of the POST request is available by referencing the integration's trigger, shown in the screenshot below. Steps can then reference data from the webhook payload, like integrationTrigger.results.body.data.renderId, as input for the integration's steps. 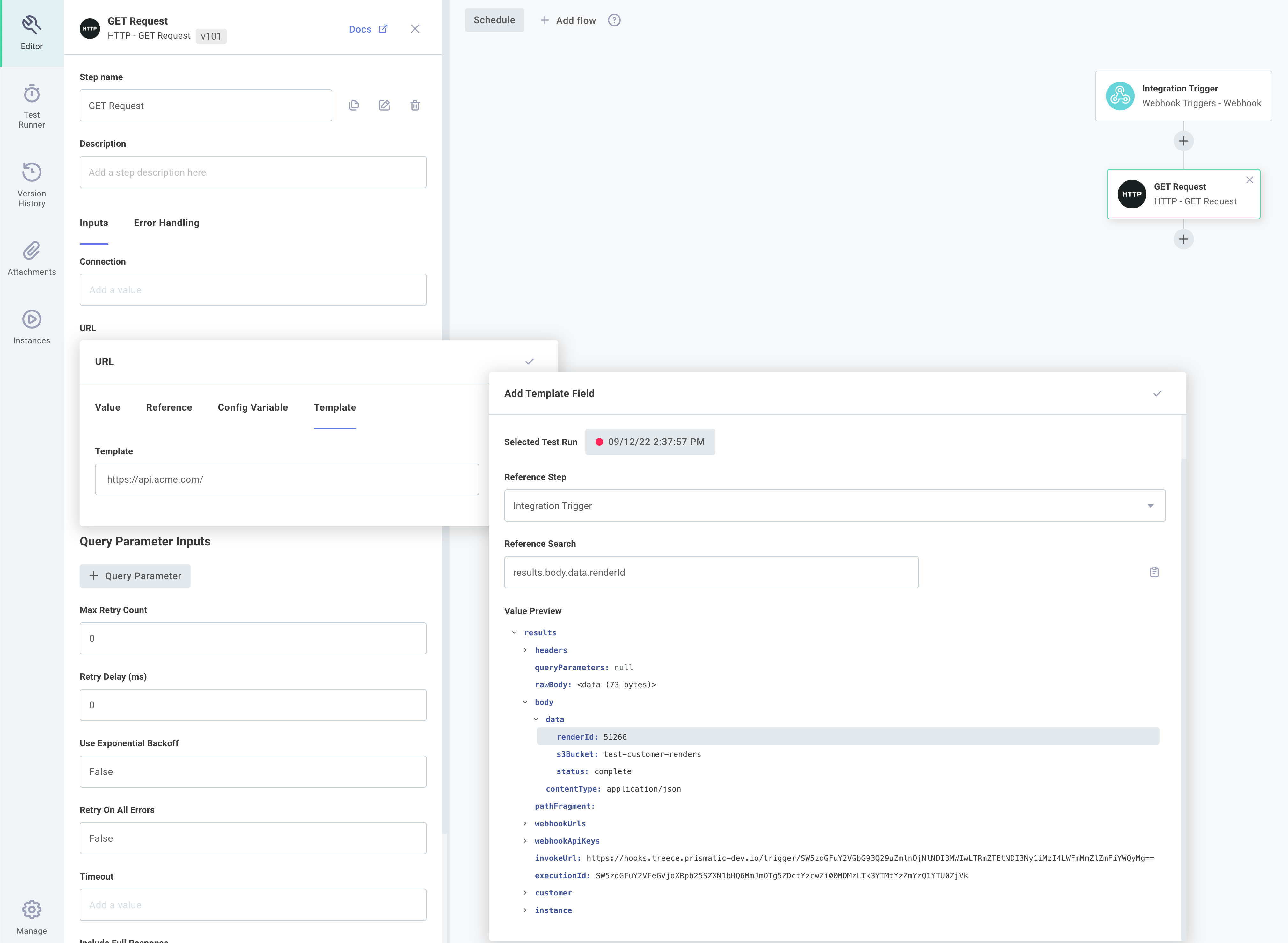 The GET verb is supported

The GET verb was introduced because some applications send a GET request when a webhook is configured to verify that the webhook endpoint is ready to receive requests.

By default, webhook triggers provide an HTTP code 200 ("OK") response to callers of the webhook. The response body contains an execution ID, which can be used later to get logs and step results from the Prismatic API. The response looks like this:

You can customize the response by clicking the integration webhook trigger and selecting a different HTTP code, response body, or response content type: 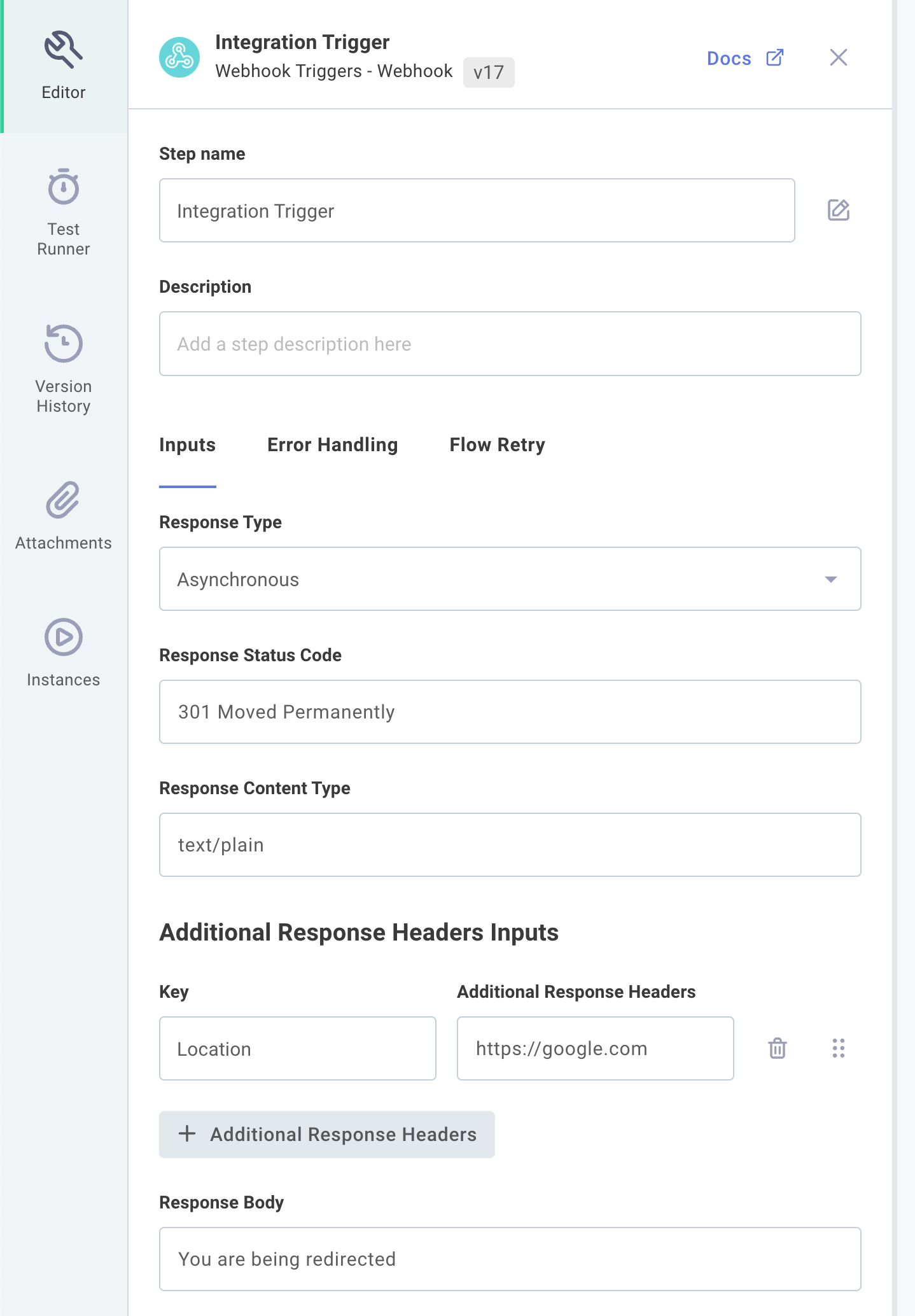 Webhook triggers can be configured for in integration in one of three ways:

For information on configuring and troubleshooting webhook endpoints, see our Endpoint Configuration article.

A webhook parses data from the following sources:

Take, for example, this curl invocation: 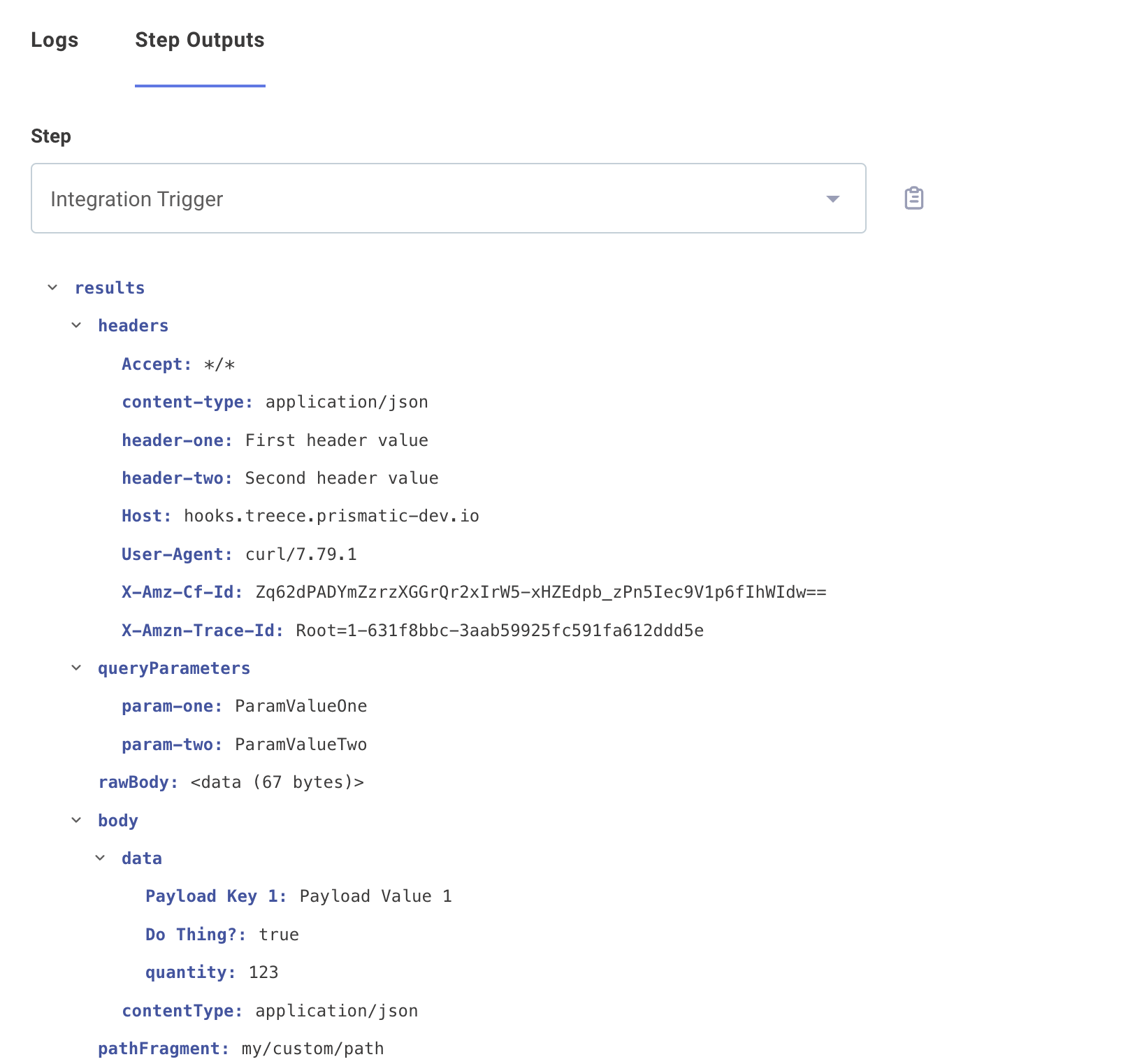 The binary file can be accessed by subsequent steps by referencing integrationTrigger.results.body.data.

It's useful to be able to post a combination of binary and text data to a Prismatic webhook. For example, you might want to post information about a person, as well as an avatar image of the person, to be processed by an integration. To do that, use a content type of multipart/form-data with your webhook invocation: 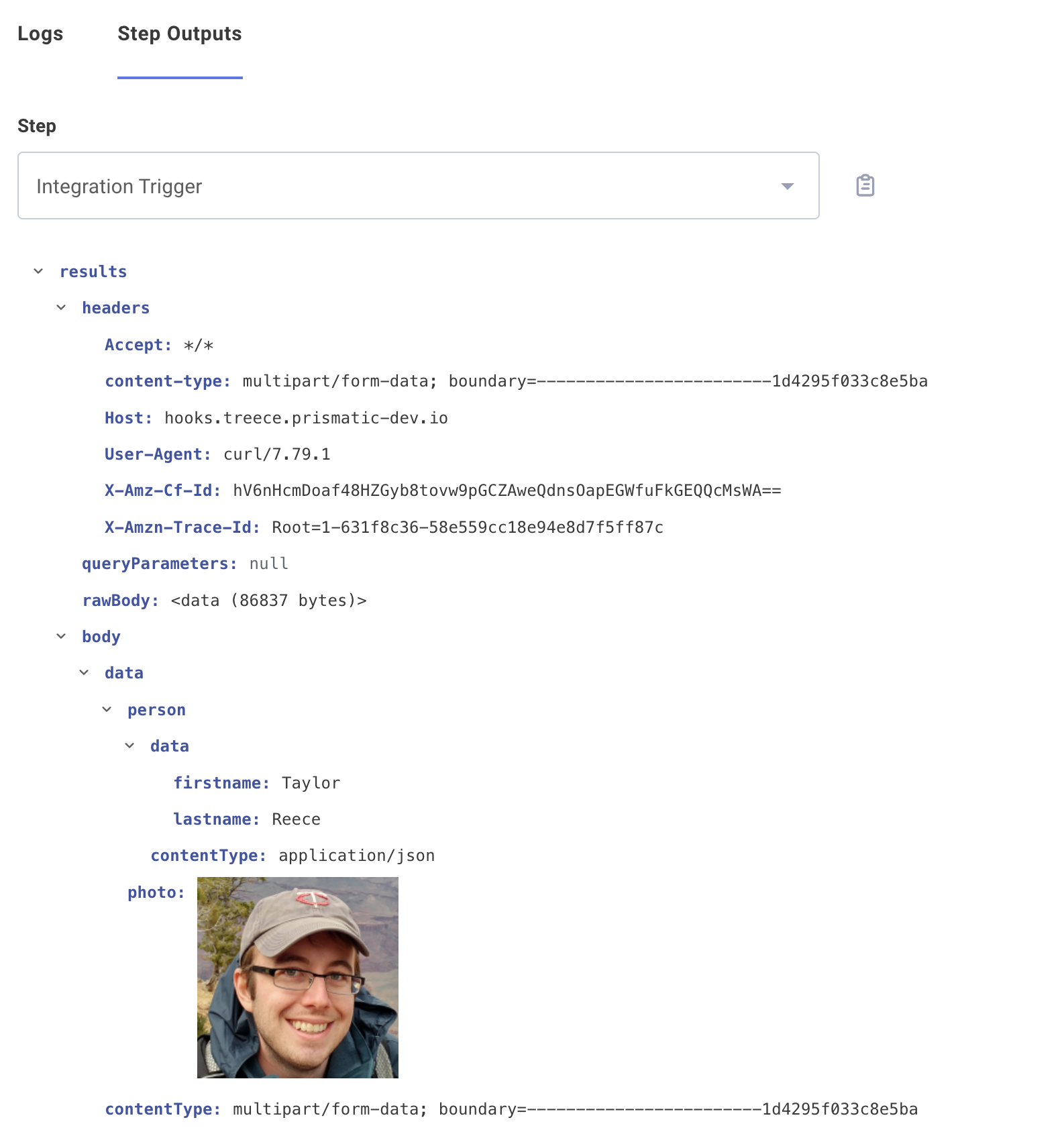 Accessing Webhook URLs in an Integration#

An integration is aware of its own webhook URLs, and those URLs are accessible by referencing the trigger's results.webhookUrls object:

This comes in handy if you need to configure a third-party service to send data to your webhooks. A common pattern is for one flow of your integration to be run when an instance is deployed using a deploy trigger. That deploy-time flow can set up webhooks in a third-party app by referencing its trigger's results.webhookUrls values. Then, the third-party app will invoke the other flows of the integration when it needs to.

Hash-Based Message Authentication Code (or HMAC) is an authentication mechanism often used by webhook providers to verify that a webhook message is legitimate. It helps to ensure that messages sent to a webhook endpoint originated from a particular third-party, and not from some bad actor on the internet.

How does HMAC Work?#

HMAC implementations can differ slightly from one another, but generally speaking when a webhook request is sent to an endpoint, the request's body is hashed using a secret key and hash function. The resulting hash is sent with the webhook HTTP request as an HTTP header.

When the webhook endpoint receives the HTTP request, it also generates a hash using same secret key and hash function. If the hash the receiver generates matches the hash that the sender sent, the webhook request is processed. If they don't match, the request is rejected.

You can configure your app to compute HMAC hashes and send them alongside your webhook requests. To generate a hash, you need three things:

Next, reach for an HMAC library for the language that your app is written in (most modern languages have an HMAC or crypto library). Here's a few examples in a variety of languages:

Validating HMAC Hashes in a Trigger#

If your HMAC hash is generated from the HTTP payload's body, the secret signing key is a string, and the hash is included as a header, you can use the built-in HMAC Webhook Trigger to validate payloads. Configure the trigger by setting the name of the header that contains the HMAC hash (e.g. x-hmac-sha256), the hashing function you used (e.g. sha256), and the secret key you used, and the trigger will accept payloads that are properly signed, and throw an error when payloads are not signed correctly. The trigger otherwise operates like the standard built-in webhook trigger.

If the app you're integrating with deviates from standard HMAC signing practices, or if you need to respond to webhook requests with dynamic responses, you can build your own custom trigger that handles HMAC validation. Slack, for example, includes an additional parameter (a timestamp) in its HMAC computation, and expects a custom response from the webhook endpoint. You can read about how the Slack webhook trigger works in this quickstart.

If there are tasks that need to occur when an instance is deployed, set up those tasks as a flow and configure the trigger to run at deploy time.

For More Information: Multiple Flows with a Deploy Trigger

You can build your own triggers as part of a custom component. This is helpful if you need to generate dynamic responses to webhook requests, or do HMAC or other payload validation before your integration runs.

Integrations are configured by default to run asynchronously. That means that whenever an integration is invoked by trigger webhook URL, the integration begins to run and the system that invoked the integration can go on to complete other work. This is the most common case for integrations - you want to start up an instance when some certain event occurs, but you don't want to wait around while the instance runs.

Sometimes, though, it's handy for an application to get information back from the instance that was invoked. For example, you might want your proprietary software to wait until an instance runs to completion before completing other work. In that case, you can choose to run your integration synchronously. Then, when your software makes a call to the instance's webhook trigger URL the HTTP request is held open until the instance run is complete.

You can toggle if your integration is synchronous or asynchronous by clicking the Execution Configuration button on the right side of the integration designer.

You can also pass in a header, prismatic-synchronous with a webhook invocation to instruct your instance to run synchronously or asynchronously:

When you invoke an instance synchronously, the output of the final step of your integration is written to Amazon S3. The HTTP request that invoked the integration execution then receives a response that redirects them to the file in Amazon S3. We do this because Amazon's API Gateway has a 10MB limit on HTTP responses, and step results may exceed 10MB - S3 has no such size limit.

Because of this redirection, you should make sure that your request library is configured to follow HTTP status code 303 redirects. For curl, for example, include a -L / --location flag so it follows redirects.

If the party initiating the instance execution request does not support following redirects, they can pass an optional header, prismatic-prefer-direct-sync-json-response: true with their request to skip the redirect to S3, and return the response directly. Note: This only works for step results less than 5MB in size, and your last step's results must be serializable as JSON (i.e. not a binary file). If your final step's output is greater than 5MB, they'll be redirected to S3. This works well if your final step's results is plain text or JSON.

Skip the redirect to Amazon S3

When an instance is configured to run synchronously or is invoked synchronously with the prismatic-synchronous header, the HTTP response returns a status code 200 - OK by default. It's sometimes useful, though, to return other HTTP status codes. For example, if a client submits wrongly formatted data to be processed by an instance, it might be helpful to return a 406 - Not Acceptible or 415 - Unsupported Media Type. 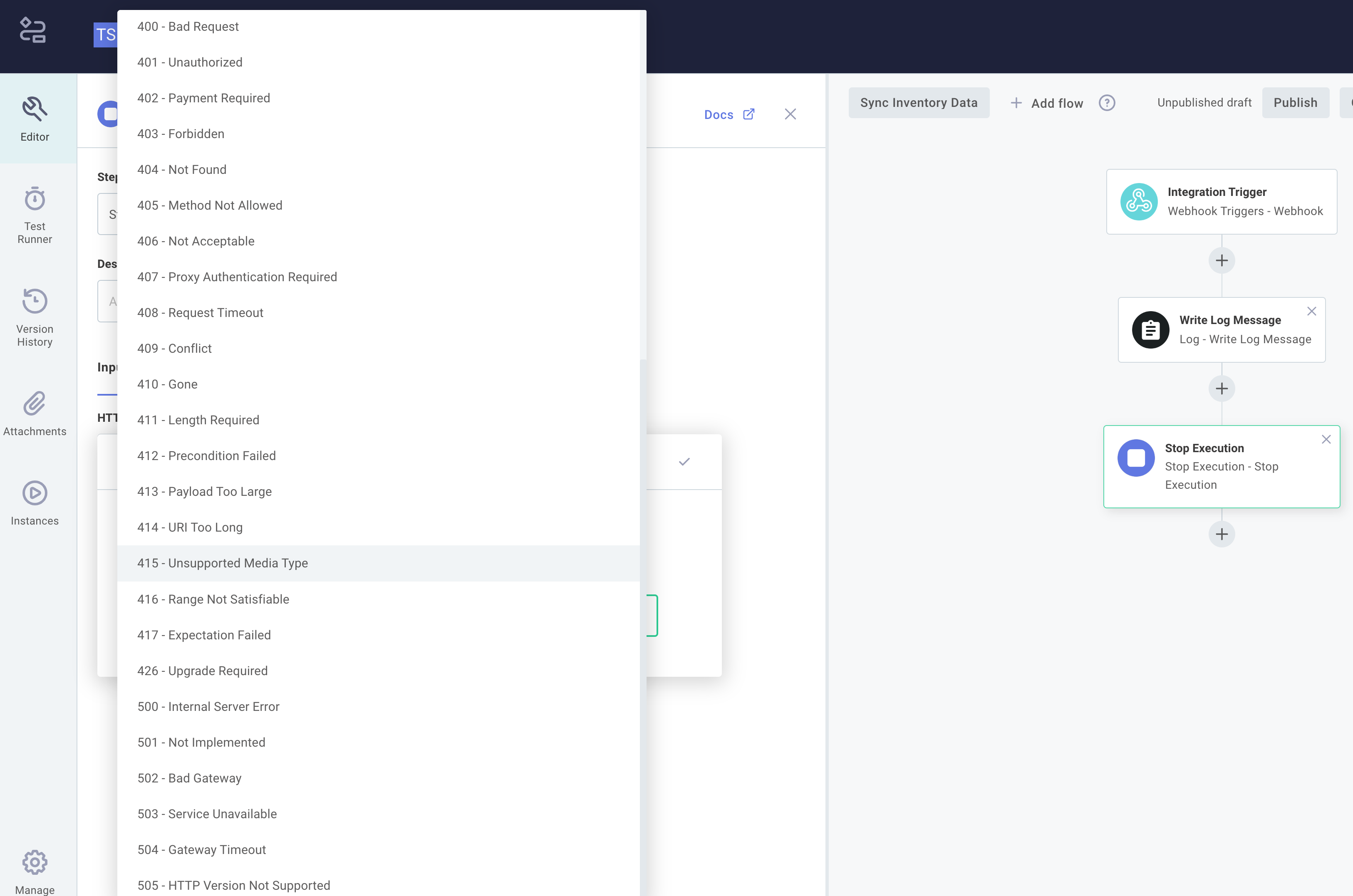 If you would like to return HTTP status codes from a custom component at the end of your integration instead, return an object with a statusCode attribute instead of a data attribute:

AWS API Gateway times out requests after 29 seconds, and our maximum response size is 500MB. So, to get a response from an instance that is invoked synchronously, please ensure that your integration runs in under 29 seconds and produces a final step payload of less that 500MB.

That execution ID can be exchanged later with the Prismatic API for logs and step results using the executionResult GraphQL mutation.